President Frank-Walter Steinmeier and Elke Büdenbender travelled with a small delegation to the Republic of Poland on 27 January 2020 to attend the commemoration ceremony to mark the 75th anniversary of the liberation of the concentration, extermination and forced labour camp complex. Auschwitz. The day began with a conversation between the Federal President and three survivors: Peter Johann Gardosch (*1930) from the Transylvanian Neumarkt am Mieresch and Pavel Taussig (*1933) from presscastle, Slovakia, and Hermann Mano Höllenreiner (*1933), a Sinto from Munich. Gardosch was taken to Birkenau in the summer of 1944 with the “Hungary Transports”. In his CV he writes: “1940 – 1949 High School in the Gymnasium in Neumarkt (interruption one year in the concentration camp)». Taussig arrives at Auschwitz at the beginning of November 1944. He survives several death marches. Höllenreiner was deported in March 1943 to the “Gypsy Camp” there and in the winter of 1944 to Ravensbrück, then to Sachsenhausen. At the end of the war in 1945, he fled the death march.

Following the meeting at Bellevue Castle, press interviews took place between the three in the military part of Tegel airport and the departure to Krakow. In Auschwitz, President Steinmeier visited the main camp Auschwitz I and laid a wreath at the death wall. Afterwards he said: “Auschwitz – a place of terror and a place of German guilt. We know what Germans have done to others, but we struggle for words if we want to describe the extent of the horror. The times are different today, the words are different, the deeds are different. But sometimes, when we look into this time, I have the impression that evil is still present, that evil is the same. And that is why we are not only talking about the past here in Auschwitz, but we see it as a permanent responsibility to resist the beginnings, also in our country.”

From Auschwitz, President Steinmeier and President Rivlin travelled together to Berlin, where they gave the commemorative speeches on 29 January at the central commemoration in the German Bundestag in memory of the victims of National Socialism. 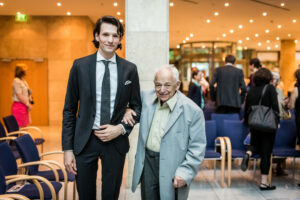 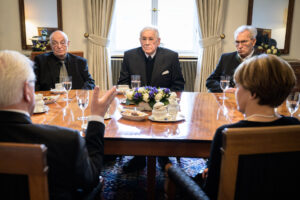