With the unconditional surrender of the Wehrmacht on May 8 and the Imperial Japanese Army on September 2, 1945, the Second World War, which had begun with the German attack on Poland in 1939, ended. Up to 65 million people – soldiers and civilians – have been violently killed. With up to 27 million victims, the peoples of the Soviet Union paid the highest blood toll. Six million European Jews were murdered during the National Socialist genocide, more than three million Soviet prisoners of war, up to 500,000 Sinti and Roma and about 300,000 disabled people in need of care. With the Potsdam Conference in the summer of 1945, the borders in the east of the continent were redrawn. Millions of people had to leave their homes. Germany was losing large areas in the east that fell to Poland and the Soviet Union, and the remaining parts were divided into occupation zones, from which two states emerged. The Cold War and the Iron Curtain between the West and the Soviet sphere of influence in the East divided the continent. Only the upheavals in Central Eastern Europe in 1989/90 enabled Europe to grow together. 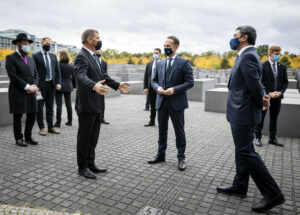