Memorial to the Persecuted Homosexuals under National Socialism

The memorial is intended to honour the homosexual victims of National Socialism and at the same time “set a constant sign against intolerance, hostility and exclusion towards gays and lesbians”. It was designed by Michael Elmgreen (Denmark) and Ingar Dragset (Norway) and was formally handed over to the public on 27 May 2008. The memorial shows a film in a window featuring a same-sex love scene. The current film is by the Israeli artist Yael Bartana.

The Memorial to the Persecuted Homosexuals under National Socialism was developed by Michael Elmgreen (Denmark) and Ingar Dragset (Norway). The artist duo lives in Berlin and has been working together since 1995.

In the interpretation by Elmgreen & Dragset, a memorial should not be static and should be understood as a definitive statement, but should have a lively character and be subject to dynamic changes. As is often the case in their works, the two artists closely inspired their aesthetic ideas to the immediate surroundings of the monument. In this case, their sculptural implementation takes over the formal design of the Holocaust memorial across the street. But the three-dimensional shape of the Eisenman steles is complemented by an extra element at Elmgreen & Dragset: The viewer can watch a film through a small, square window in which two men hug and kiss endlessly. By making a clear reference to the Holocaust memorial, the monument seems to express that while we as human beings are all the same, we still differ from each other. This is the challenge of our tolerance and acceptance.

History of the Memorial to the Persecuted Homosexuals under National Socialism

In Nazi Germany, a homosexual persecution took place unparalleled in history. In 1935, the National Socialists ordered the comprehensive criminalization of male homosexuality. To this end, the provisions against homosexual conduct provided for in § 175 of the Criminal Code have been significantly tightened and extended. Already a kiss among men could now lead to persecution. § 175 meant prison or penitentiary. There were over 50,000 convictions. In part, the Nazi authorities were able to force the castration of convicts. Several thousand gays were trafficked to concentration camps because of their homosexuality. In concentration camps – such as Dachau near Munich – they had to wear a pink angle on the prisoner’s clothing to identify them. A large part of them did not survive the camps. They died due to hunger, illness and abuse or were victims of targeted killings.

The National Socialists have crushed the lives of gays and lesbians. Female homosexuality was not prosecuted – except in annexed Austria. It was considered less threatening to the National Socialists. Nevertheless, if lesbian women were at odds with the regime, they too were subjected to repression. Gays and lesbians lived intimidated in the Nazi era and under constant compulsion for camouflage. For a long time, the homosexual victims of National Socialism remained excluded from the culture of remembrance of both German post-war states. Here as there, gays were still prosecuted for decades to come. In the Federal Republic of Germany, § 175 remained unchanged until 1969. In many parts of the world, homosexual love is still punishable.

From its history, Germany has a special responsibility to resolutely oppose human rights violations against gays and lesbians. In many parts of the world, people are still persecuted for their sexual identity today, gay love is punishable and a kiss can mean danger.

On 12 December 2003, the German Bundestag decided to build the Memorial to the Persecuted Homosexuals under National Socialism.

“The Federal Republic of Germany is erecting a Memorial to the Persecuted Homosexuals under National Socialism in Berlin. With this place of remembrance, we want to honor the persecuted and murdered victims, keep the memory of injustice alive and send a constant signal against intolerance, hostility and exclusion towards gays and lesbians.”

The initiators were the initiative “Der homosexuellen NS-Opfer gedenken” (Commemorating the homosexual Nazi victims) as well as the Lesbian and Gay Association in Germany (LSVD). The memorial site is cared for on behalf of the Federal Government by the Foundation Monument to the Murdered Jews of Europe.

1992/1993
In connection with the discussion about the Memorial to the Murdered Jews of Europe, there are first demands and actions in favor of a national Memorial for the Persecuted Homosexuals under National Socialism.

June 25th, 1999
Decision of the Bundestag to establish the Memorial to the Murdered Jews of Europe – combined with the obligation to “commemorate the other victims of National Socialism in a dignified manner”.

May 3rd, 2001
Joint call of the initiative “Der homosexuellen NS-Opfer gedenken” (Commemorating the homosexual Nazi victims) and the Lesbian and Gay Association in Germany (LSVD) for “a Memorial to the Persecuted Homosexuals under National Socialism”, which includes the support of Paul Spiegel, Romani Rose, Günter Grass, Christa Wolf, Lea Rosh and others.

May 17th, 2002
The Bundestag decides on the legal rehabilitation of the victims of § 175 in National Socialism.

December 12th, 2003
Decision of the German Bundestag for the construction of the memorial.

2005/2006
Conducting the artistic competition to design the memorial point.

June 4th, 2007
Agreement between the Federal Government, the initiators and the artists Elmgreen & Dragset to further develop their award-winning design.

October 7th, 2014
The original film by the artists Elmgreen & Dragset will be shown in the memorial until a new film competition is announced.

June 3rd, 2018
On the occasion of the tenth anniversary of the Memorial to the Persecuted Homosexuals under National Socialism, Frank-Walter Steinmeier was the first Federal President to speak at this memorial site. At the same time, a new film by the Israeli multimedia artist Yael Bartana can be seen in the memorial.

Integral to the design by the artists Elmgreen & Dragset is a cinematic presentation to be viewed through an opening in the memorial. Already on 4 June 2007, before the ceremonial opening, the then Federal Government Commissioner for Culture and the Media, Minister of State Bernd Neumann, announced a further development of the memorial concept after approval by the LSVD and the artists: Accordingly, the film is to be changed every two years, with a jury of experts making the decision on the newly shown film. Since the opening, three films by different artists have been featured in the memorial so far.

Current film in the monument (by Yael Bartana) © gay museum

First film in the memorial (by Elmgreen & Dragset) 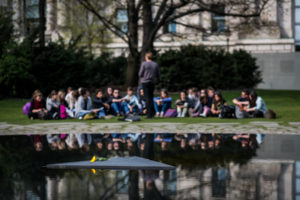 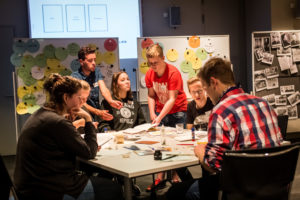 LEAFLET TO THE Memorial